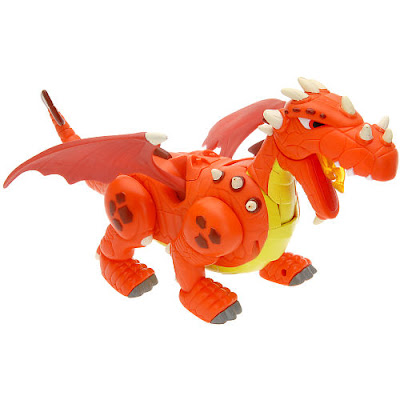 Sarah has for a while been nagging us that she want this special Imaginext Fire Breathing Dragon. The thing cost $20, and I told her she would have to save up herself. Today she told me she "had lots and lots of coins" so we took her savings to the local supermarket to have them counted. She netted $24, not bad!

So, she could get her dragon. We decided to go over to Wal Mart, since it is just 2 minutes from our house, and I really didn't feel like traveling around town just for this dragon. I really don't like Wal Mart at all. They don't treat their employees or the communities they barge into right. Not to mention the people that work there often can be very hard to deal with.

We picked up the dragon and a couple of other things and proceeded to the self checkout. I scanned the merchandise and it came out to $29 and some cents. I had Sarah's $24 plus $10 I got from selling Sarah's old tricycle on Craigslist.org yesterday, so I fed the machine the $20 and the $10 I had. Immediately after putting in the $10 I knew there was a problem. The machine only saw the $10 bill as a $1! I was so pissed! I use the self check out since it is usually speedier than having to deal with a human. So now I had to call the attendant over, and she had no idea of what was going on. I told her to just open the machine and she could see the money I had put in. She obviously had no clue what she was doing, and soon the manager of that area was called in. She continued the same fruitless steps as the previous lady. I was getting very frustrated.

Finally she opened the freaking machine, but she could only see the $20. Apparently the last bill put in sits "inside" the machinery until the next bill is put in. Sigh. Now I was really pissed! Now they only had my word to go by. She brought me over to a different station and called her supervisor. I could tell by the conversation they really thought I was a confused woman, but I didn't say anything. After all, I knew I came in with $34 in total, and I sure only had a few dollar bills left in my wallet. It was taking a looong time, but finally the manager told me to go over to yet another station, where she told the first lady to ring me up as if I had handed her $30, and she made it clear she did not agree with her supervisor's decision on that.

I was happy the situation was cleared, after all, I would have been pretty pissed loosing $9 because of their dumb machine. No more cash for me in the future, I will stick to my Debit Card!

Posted by SweFloKeto at 3:29 PM