I was just sitting here and thinking about all the people that all of a sudden seem to be pregnant. I was reminiscing back to when I was pregnant myself. I got pregnant on our second try in April 2002, but had a miscarriage in the 6th week, and we were very eager to get pregnant as soon as possible, since I could only stay off my medications for so long. The pregnancy was supposedly going to produce enough natural steroids so I would be OK (and it did!), but until I was actually pregnant again I could still get sick. So we didn't wait the 3 months the doctor said, I got pregnant as soon as we tried only one cycle after the miscarriage. I new exactly what day and everything, early in September 2002, since I was using ovulation tests and was very in tune with my body back then.

The second time I was a bit more careful in getting all excited, which I think is pretty natural just having gone though a miscarriage. I was thinking of how I told Ken we were pregnant again, and I still have the e-mail I sent him. This is the picture it contained: 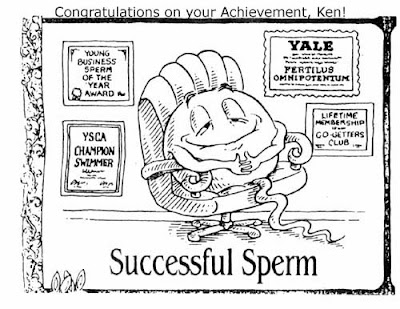 I would like to think I will have more children in the future, but as it is now it just isn't in the cards. My health would have to be more stable, and not to forget the enormous cost of a second child. You don't get any kind of monetary help in this country, and I would not get any kind of maternity leave due to being self employed...

How did you tell your significant others you were pregnant?
Posted by SweFloKeto at 12:21 PM