I probably mentioned earlier that I had a mole removed that turned out to be cancerous. No big deal for me, since it is not exactly the first time. I go for check ups twice a year and I am very aware of all my gazillion moles.

This particular mole was a little tiny black dot on my left leg. Nothing much, but since it wasn't there during my last exam I asked her to slice it off. And sure enough, it was a bad bugger!

Usually when they slice things off that is it. If it was benign, good. If not, they usually got all of it. This time (as a few times before) they didn't get quite the clean border they needed to have to ensure it wouldn't spread. So they had to cut some more.

As soon as she started to cut I knew the numbing meds hadn't taken. So she had to give me more. And more! I got 4 times the normal dose, but still felt a little, but at that point I just told her to cut anyway, since I just wanted it over with. Since this is a secondary cut it is a bit deeper and will likely leave a pretty good scar, so I will make sure to really take care of the wound for a long time to minimize that possibility. This is the first time I had a secondary removal in such a visible spot, so I really want to do what I can to minimize the scarring. Ken thinks I should tell people the scar is from a shark bite or something like that. Sounds better than saying you had a mole removed, ha ha!!!

Since it is a deeper cut I also have to have a pressure bandage on for a while, before switching to regular bandages. Sigh! A bit hard to work today with all that throbbing pain. I might have to dip into that bottle of nice little white pills they gave me for the pain... But hey, at least I am cancer free (for this time)! :-) 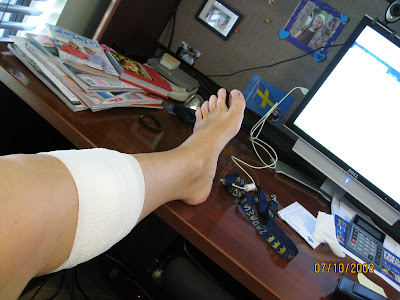