The weekend has overall been very nice; we had a great breakfast on the beach Sunday morning, followed by a little fishing.

But a couple of really bad things happened too.

The first thing and the worst was that I discovered that Stan has a very bad case of periodontal disease! This makes me feel like such a bad dog-mom... Stan has always been the healthier of our two dogs, and as late as this past summer he got a clean bill from his vet, when they were boarded there for 2.5 weeks during our Sweden trip.

The vet looked at both dogs teeth, and he said Bob had some tartar (tandsten) that needed to be removed within the next year, but Stan's teeth was great!

On Saturday I just happened to pull up his lips and got a sinking feeling in my gut. He didn't have any tartar, or even signs of gingivitis, just total erosion of the gum surrounding his upper four front teeth. One was even loose, hanging down a bit! How is this even possible? How can he deteriorate so fast without anyone noticing? After all, I keep a pretty tight eye on them and their health. Can something have gotten lodged in the gum to cause an infection? I have no idea. All I know that both dogs are at the vets right now, for a total tooth cleaning. They will both get antibiotics as well. Stan will with 99 % surety loose his upper 4 teeth. Luckily they are not as essential as for instance his canines, so he should be fine. The rest of his teeth look great! I just don't know how this could have happened! My poor baby! He must have been in a lot of pain, but he never flinched or showed any signs of pain.

As you can see in the picture (hard to get him to sit still for a picture), his teeth are clean (the brown on his canine is just discolor, not tartar. Poor thing! 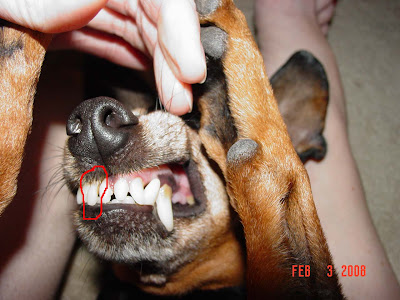 I circled the tooth that is falling out. His upper 4 front teeth should have about 50 % more gum!

Their vet will give them doggy Valium, so at least they don't have to be put under or being stressed out. I am picking them up at 4. Oh my heart aces for the poor thing!

The second bad thing that happened was a total accident. Late Saturday night Sarah and I got into my car in the garage to do a run up to the store. It was pitch dark outside, but the light from the garage usually is enough to see where you are going. Ken's car is usually parked toward the side of the drive way, so you have to be careful.

While I was backing out some car was going by, so my mirrors were blinded with the light from that car. But I could see the outline of Ken's car, and I was in the clear for sure. So I backed out. Right into the outer edge of his car! Oh shit! I have never ever caused any kind of accident, had a speeding ticket or parking ticket. I consider myself a very safe driver with great judgment and attention. This was a total accident! Ken's car got scratched on his front right, and mine have a dent in the back bumper.

I feel so bad; I would never intentionally do anything like this, of course. Ken freaked out on me, pretty much making me feel like a total looser, like I don't care about my car at all. He kept saying he knows every little scratch on his car, because he always park away from people and is careful. I on the other hand have lots of dents and scratches on mine. That is not true, my car only have minor dents, all caused by other people. He is also a driver who speeds, never uses his turn signal and so on. If there was a real comparison I am sure I would come out as the safest driver, bar none. My car is almost 5 years old. It would be unreasonable to think I would have no dings by now.

Very frustrating that he would get mad at me like that. He kept going on and on. I am just not going to mention the incident any more. I think it is very unfair to treat me like that, I am a great driver, and what happened was just a result of the circumstances at the time. Maybe he should focus his energy on something more important, like, World Hunger!

I will update you on the pups when they get home.

Have a great day!

Posted by SweFloKeto at 9:19 AM