We arrived in good order on Thursday. It took us a little time to get the Wi-Fi going, getting groceries and unpack.
By the time we were done, it was almost 8 PM, so our first night in DC was spent just going out for a nice dinner at a Mediterranean restaurant and watching a movie at home.

Our condo that we rented was just perfect: a short walk from the METRO, in the historic Barracks Row/Eastern Market neighborhood, on Capitol Hill. A nice mix of residential housing, shops and cozy little restaurants, most of them pretty old and historic. In fact, I don't think I saw any modern or new buildings while we were in DC! It seemed like a pretty safe neighborhood, not that we ventured out that much at night anyway... 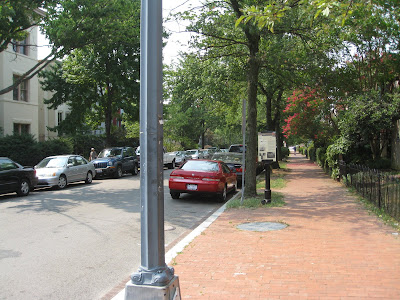 A typical street in the Barracks Row neighborhood
I think we made a good choice renting a condo rather than getting a regular hotel room. We had all the comforts of home, a living room with a huge, comfy couch, flat screen TV, DVD player, stereo, fully equipped kitchen, bathroom, two bedrooms (but we used the guest bedroom as a dressing room for all our clothes, since we had 3 beds in the master bedroom).

We were on the 2nd floor in a building that is called the Defalco House, a pretty old house, but the condo is newly renovated and modern, so the best of both worlds! 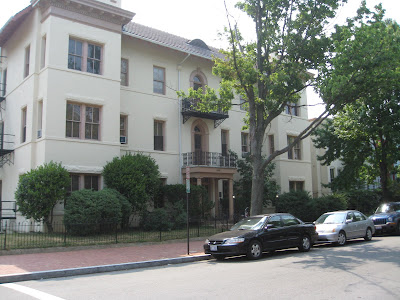 Here is the Defalco House, we stayed on the second floor on the right.
Our first day out on town, we wanted to get a lay of the land, so to speak. Both Ken and I have been to DC before on separate occasions, but it was all work and no sightseeing at that time, so the city is still pretty new for us both.

Having used the subway in several other cities, the METRO was easy to figure out, and we were off at 9 AM. Most places doesn't open until 10 AM, so no need to stress in the mornings!

We had booked a 1 ½ hour tour of the city with DC ducks. This tour is a little more family oriented, and the tour vehicles are actually amphibious military vehicles, almost 60 year old! The fun part is that we got to tour both on land and on the Potomac River, since it can handle both. At the end, the driver/captain handed out "quackers" that people (read kids) quacked with to their hearts content.

The tour took us around the city, and the guide was very knowledgeable, telling us about all the different things we passed by along the way. The tour started and ended at Union Station, that in itself a beautiful building. 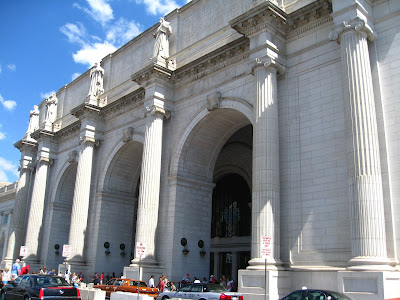 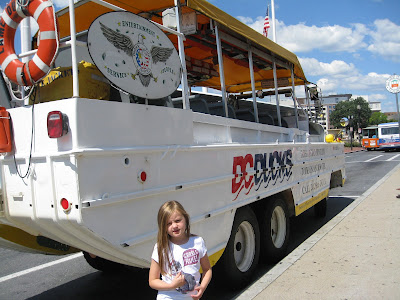 Sarah getting ready to get on the bus/boat 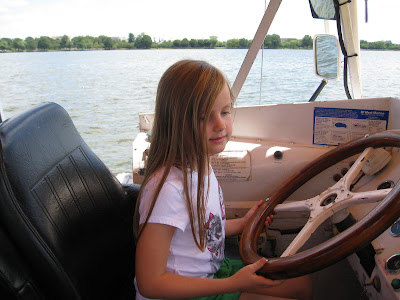 While on the Potomac River, Sarah got to drive the boat! 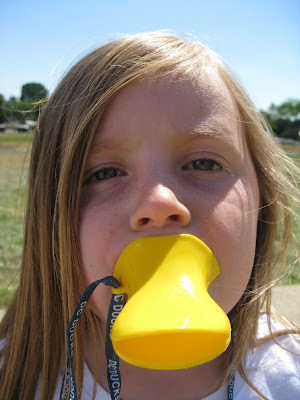 And Sarah with one of the famous quackers they hand out
While on the river part of the tour we drove by the Pentagon up close, and we got a great view of all the famous monuments. 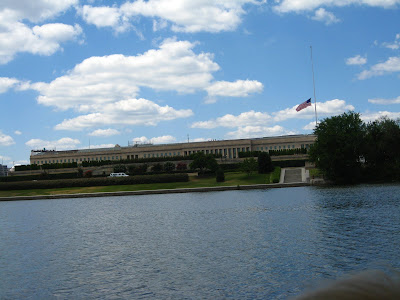 The Pentagon
We also saw a lot of nice vistas over the city itself, as well as many of the buildings that hosts various national and federal agencies and the well renowned Smithsonian Institute museums. 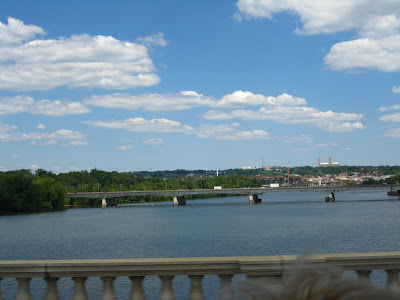 View over the Potomac River 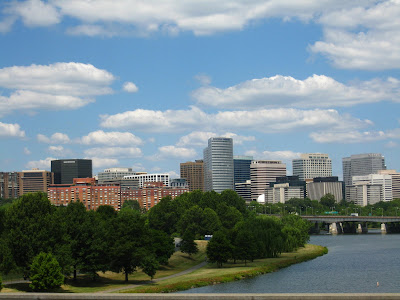 A view of downtown 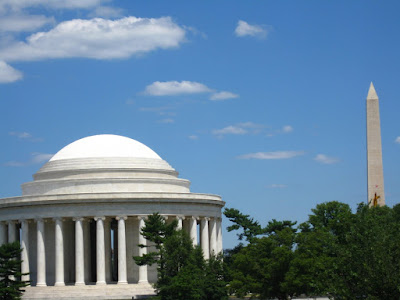 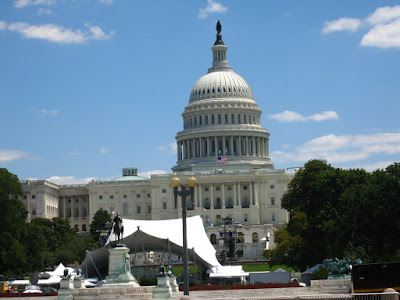 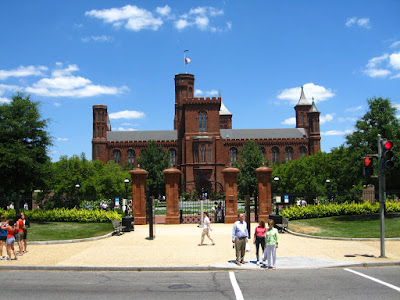 After our tour we took the Metro to Chinatown, which in DC is very small compared to the one in NYC. But we had a tasty lunch there and walked around and enjoy the atmosphere a little bit. 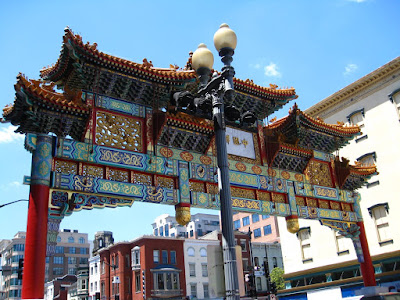 The gate at the entrance to Chinatown
After lunch it was time to visit the Washington Memorial up close and personal. I had tickets for us to take the elevator up to the top, which is otherwise hard to get unless you book them in advance or show up early in the morning. We had a fantastic view of DC from up there! 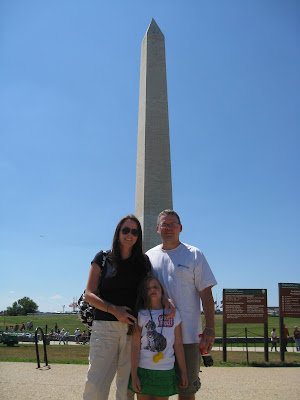 We are getting ready to get up in the Washington Memorial 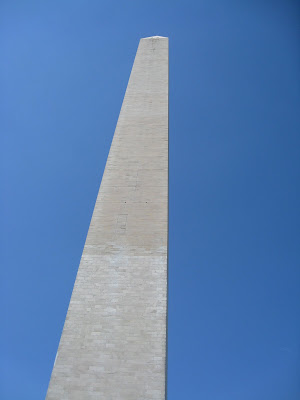 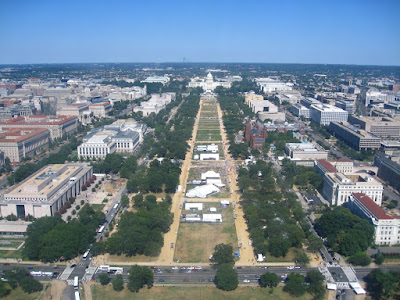 ...but just look at that view! This is the Mall, facing the Capitol. All those white things in the middle are tents were the annual Folklife Festival was going on. 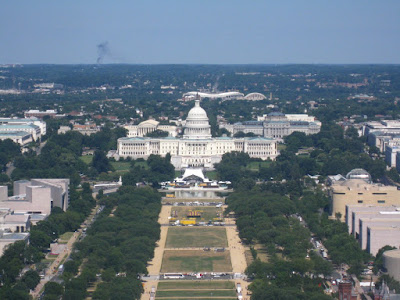 The Capitol at the end of the Mall
From another side we had a pretty good view of the White House. How do you know if the President is home? There are snipers on the roof (too far away too see any in this picture, but we saw them later on). 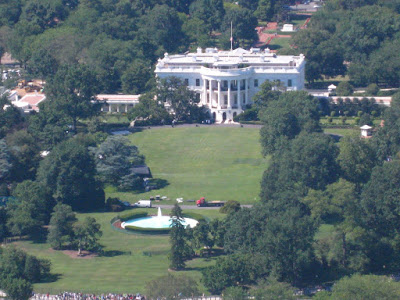 After the Washington Memorial we continued down the Mall to see some of the other monuments. It was a hot day and it is a long walk, but it was very interesting. 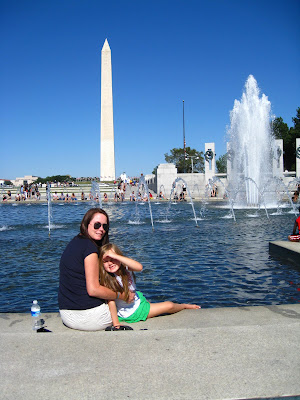 Here Sarah and I (as well as many other people) take the opportunity to cool our feet in the cool waters of the WWII Memorial. 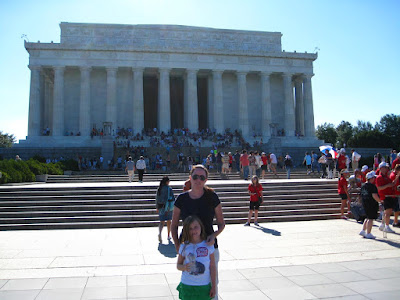 At the end of the Mall is the impressive Lincoln Memorial 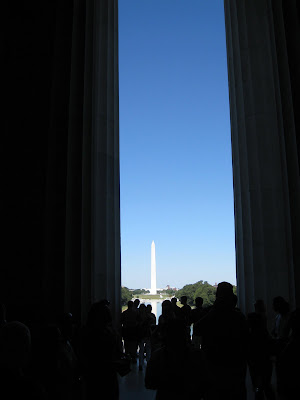 View from inside the Lincoln Memorial towards the Washington Memorial 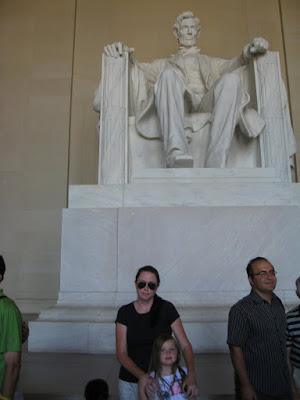 President Lincoln looking down on us 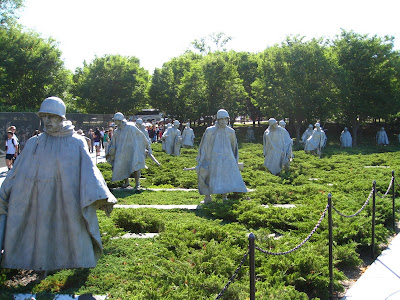 Part of the Korea War Memorial 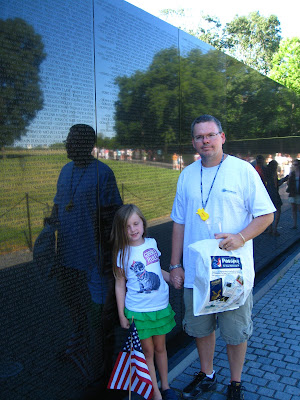 Ken and Sarah in front of the Vietnam War Memorial

We were pretty wiped out after our first day in DC, but still looking forward to visiting the National Air and Space Museum and the National Archives the following day.