We were very curious to see how it would be to experience America's Day in the Nations Capitol. We decided to head northwest to the National Zoo in the morning, to see the famous pandas, of course! From what I have heard, the zoo itself is not that spectacular, but seeing pandas is a big enough draw. Especially since they are slated to return to their home country China later this year, which they have been on loan from for 10 years now. 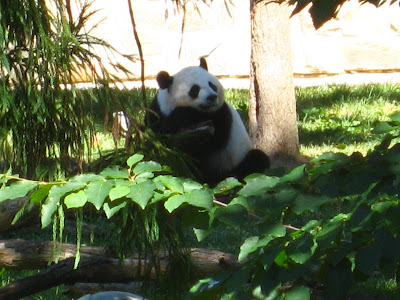 One of the three pandas
A favorite was something called Amazonia, an indoor recreation of the Amazon forest. Here the animals roamed free, and we found a cute little monkey to take pictures off. After getting a little too close, he decided to try and grab my camera... 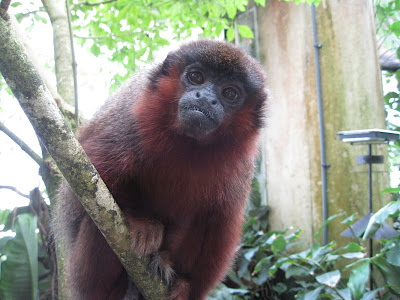 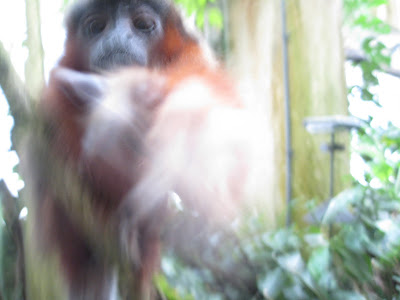 ...who was also very curios. Here he tries to grab my camera! 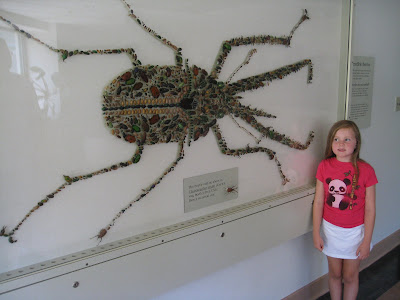 A cool bug made out of other bugs in Amazonia
It was hot and humid, not very pleasant at all. Luckily we got by with some ice cream and lots of drinks! I felt bad for the furrier of the animals, but I saw the next day on the news they had provided them with frozen treats to cool off with. The tigers and lions even got frozen blood popsicles :-)! 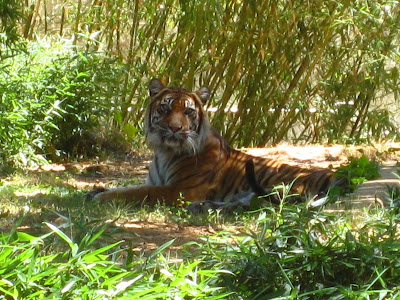 Sarah's favorite animal, the tiger
We had gotten a tips to start in one particular end, since the zoo is on a hill, and therefore we would be walking down hill all day. That is a particular great idea for a zoo like this, which is designed around just one major walkway that goes right through. We felt really good about this smart tip, until we got to the end. We stopped to ask how we would get to the METRO from there, and they smiled and told us the only access to that street was to go all the way back to the other end. Uphill. Groan!!!

To add to the problem was my blood clot that I still have in my left lower leg. It decided to rear its ugly head and completely clog my leg. I have a vena cava filter that should (it is 80 % secure) prevent a loose clot from wandering up to my lungs, heart or brain. I was allergic to most of the blood thinners so they just put that in instead.

But, once in a while after walking a lot (which we obviously had been doing the past few days) it clogs the blood flow. It goes into the leg, but have a hard time leaving it. So the leg swells to double size and hurts like crazy.

Lets just say that was not a pleasant walk back to the other end... To be on the safe side I stopped by a pharmacy to get some blood thinning aspirin, in hopes it would thin the blood out a little and ease the swelling and the block. Because we still have a lot of vacation left at this point!

After getting home we rested up and cooled off in wait for the evenings fireworks display. I tried to lay with my leg up high and drink a lot of water, but it just wouldn't budge much at all. Big bummer!

But leg problem or no leg problem, we were here to experience the fireworks, so we started down toward the Mall around 7:30 PM. The METRO was super packed, we felt like sardines. Most of the people had already staked out their spots on the Mall hours earlier, so we were definitively some of the late arrivals. We still managed to get a wonderful spot almost right in front of the Washington Monument where we spread out our blanket. The fireworks were set to go off at 9:10 PM.

I could not believe the amount of people, like a never ending sea of people, stretching all the ways around us. I think this is by far the largest crowd I have ever been in. And we did not see any people behaving badly or unruly, it was just a very festive atmosphere all around.

The fireworks were great, but I think just being where we were made them so much more special! 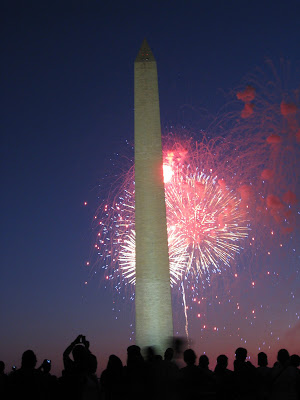 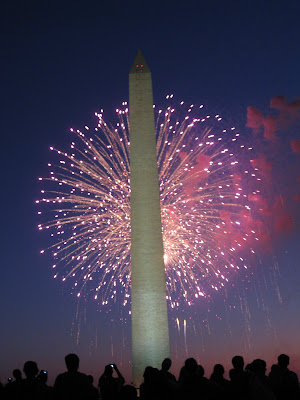 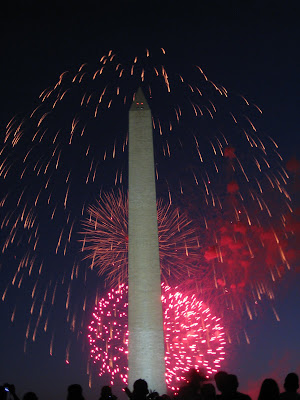 Wow!
After the show we had planned on taking the METRO home, especially with my bad leg and all. But the huge amount of people that immediately after the show started to make their way to the METRO stations in the different directions around us did not look promising. It would probably be hours just trying to get down to the trains, and with all those people pushing, no air and hot: not a great idea...

So we made the decision to walk home. It took well over an hour and I was in horrendous pain by the time we got back. My leg was not happy at all... But thinking about the METRO and how bad that would have been made the decision still the better one. And a cab was not even to think about, people threw themselves on them any chance they got!

Besides the pain and discomfort, the walk home was actually very nice. We walked over the Capitol grounds, saw the Supreme Court, Congressional and Senate buildings, all very interesting. And the mood and atmosphere were all still very festive, with people celebrating Independence Day all around. 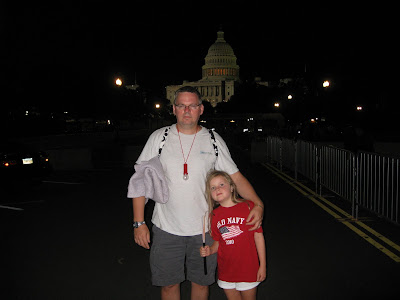 A very tired and hot Ken and Sarah on our walk home, in front of the US Capitol Building