I often feel so bad for the stray cat that has adopted us, since it often rains like crazy here and I can tell in the morning after a bad stormy night how miserable he is. There is really nothing around here to take shelter in except for perhaps under a car or in a bush.

We had already talked about making a little shelter for him when it gets cold (last winter we had several weeks worth of freezing nights after all).

Sunday nigth we had a particularly bad rainy nigth and both Ken and I knew we couldn't stand it, we had to come up with some kind of cat shelter NOW.

I looked at materials and such to build one, but it almost came out as the same if I bought one, so I decided to do just that.

This is a smaller version of a dog house, adjusted in size for cats. It is igloo shaped, insulated and should keep him dry and toasty. It even has carpet inside!

I decided to put a piece of heavy duty plastic as a little roof outside to avert the worst rain and keep the entrance dry as well as the bowl.

Not pretty perhaps, but we don't care, and if the cat starts trusting the shelter he should be pretty happy with it.

We just have to let him check it out in his own time, but a good start is to place his food bowl right in front of it, and I put yummy treats inside to lure him in. I figured by placing a white towel I should be able to tell if he has slept in there, he having black fur and all... 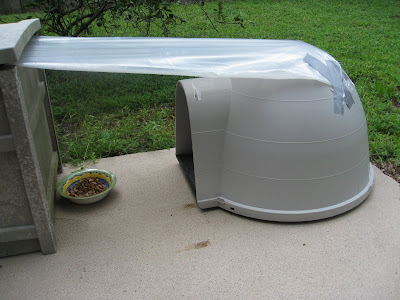 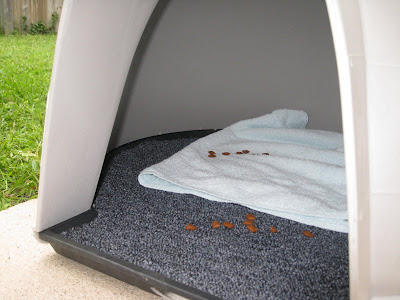 Posted by SweFloKeto at 3:46 PM