Our plans for the new year celebration was to do nothing and just swing by the grocery store and see what might look good for dinner. Instead we ended up at one of our favorite gourmet Italian restaurants where we enjoyed a scrumptious meal of baked snapper and file mignon followed by spumoni for dessert.

After that the couch beckoned, and instead of spreading out we all (Ken, Sarah, both dogs and I) somehow ended up in the small two seat couch. 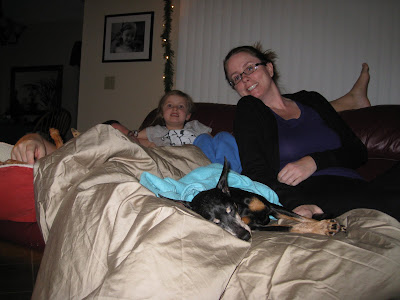 The entire family; Ken at the bottom, Sarah on top, me at the end, and then Bob in the red dog bed and Stan on our comforter in front of me.
Ken fell asleep very soon, but Sarah was set on staying up to midnight, so I had to as well... Sarah discovered a new favorite; The Three Stooges! She watched hour after hour of it, laughing hard. The Three Stooges are pretty unknown in Sweden, but you can read about them here. I was impressed she liked watching an old black and white show from the 30s!

When it was almost midnight I woke up Ken and he and Sarah went outside to watch the fireworks, and I went to bed...

Today we had planned on going hiking and letting Sarah practicing biking on her new big kid bike, but it had rained hard all night and there seemed to be no letting up. Then all of a sudden Ken came running in and said he saw a clearing up on the radar on TV, so we hopped in the car and took off. I walked the dogs while they biked, and Sarah managed to bike herself without training wheels for the first time! Then we went hiking, but it was cooold and windy. When we saw the rain clouds starting to pile up we knew it was time to go home.

Now I am planning on making dinner, a yummy pasta I think it will be...
Posted by SweFloKeto at 5:10 PM