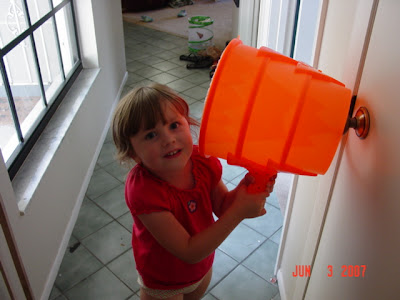 If you ever need to let out some steam or just have fun with the kids, i can recommend the AirZooka! We got this many years ago, but it never stops being fun... It is a toy using simple mechanics you use to shoot off harmless puffs of air.

The Airzooka, air bazooka, is destined to become a classic! Airzooka has a unique hand-held system that shoots a harmless "ball of air" towards objects and people. Watch folks howl with amazement as the Airzooka, seemingly from nowhere, messes up someone's hair, ruffles shirts or just blows them away from up to 40 feet!

Drive your dog or cat CRAZY!!! Aim at squirrels with your Airzooka. Best of all, the AirZooka uses no batteries, so you'll never run out of ammo. An air bazooka, invented by Brian Walker, is a tube with a flexible plastic cover on one end, named for its appearance after the bazooka. By pulling back the cover, the person using the air bazooka draws air into the tube. When let go, pneumatic pressure snaps the cover forward, launching a massive amount of air at the target that the tube is being pointed at. 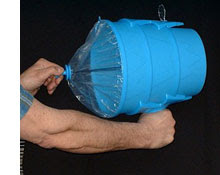 Bob the dog hates it, Stan doesn't seem to mind too much. The daughter LOVES it. great exercise for mom chasing after her!

Posted by SweFloKeto at 3:20 PM