S has been a little off since Friday night. She had a fever and some gook in her eye - same eye thing that she had a few weeks a go. Then her doctor said it was most likely allergies and gave her some antihistamine eye drops. I am not so sure it is allergies...

She has had a fever on and off, mostly at night, and they eye is really irritated and has a lot of discharge. It looks like the other eye is getting it too. She also have a stuffy nose and general cold symptoms. So if the drops don't seem to work I will call her pediatrician tomorrow.

We still managed to go to the birthday party yesterday. There were a lot of people there, and they had set up a jump castle and other fun outdoor toys outside. 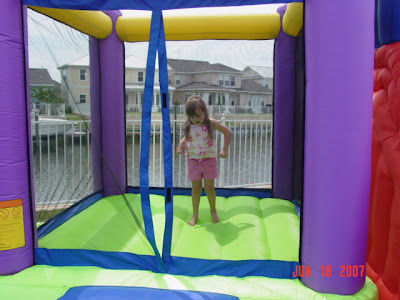 Very lavish spending! I am more of a home cooking and relaxed kind of person. catering and ponies and all that is a little too much. But you sure see more and more elaborate kids parties. In two weeks S's friend Z is having her 4-year old party. Hers is going to be at a pottery painting place. That should be cool! I have been wanting to take S to one of those places for a while. 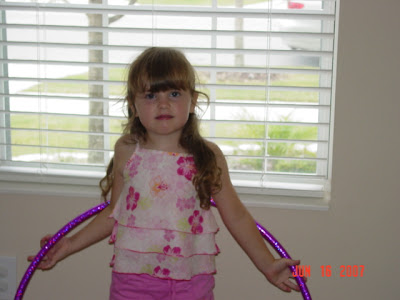 S at the birthday party

I am almost done buying gifts for friends and family in Sweden. Maybe just a couple of more... I can't buy for everyone, so it is mainly for my cousin's kids, my mom, and my aunt and her family which we are staying with. And my dear old friends. And their kids. And... Every time I am out I think of someone else I want to get something for. So I think just today and that is it. Otherwise there won't be any money left for me to shop for in Sweden! FASA! 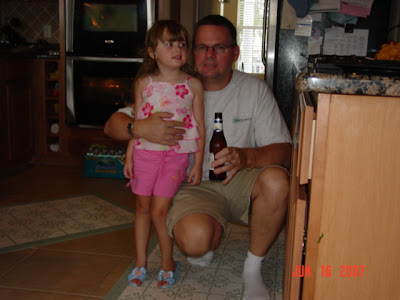 S and K at the birthday party
We scrapped the beach plans for today since S is sick, but S and I are going to the outlet mall and they all of us are going out for an early dinner on the beach.

*** UPDATE***
Sdefinitly got bacterial pink eye, so they gave her some antibiotic eye drops to use for three days. Now I just have to wrestle her down three times a day for three days... She hates the drops, says they tickle too much! :-)

Jo det är helt klart bacterical pink eye... It will clear up by itself, you can get antibiotic drops or oitnment, but she hates those. She woke up thi smorning complely clear in he reyes, so that is good. Yesterday she could barley see! Very contagious indeed...