Two peas in a pod?

I am amazed how different our two dogs are! I guess dogs are in a way just like humans. Their similarities are many: they are both miniature pinschers, both born 2000, both get the exact same exercise and same food options... Yet they are quite different physically and mentally.

We got Bob, the red one in fall 2000. I had no whatsoever experience with dogs, in fact I have always been more of a cat person, but with an allergic husband, a dog was my only option. I wanted a breed that was as much as a cat as I could find, hence the miniature pinscher (dvärgpinscher). I had never actually seen a real live min pin, but after extensive research I knew it was the kind of dog I wanted. I also kept hearing "don't get a dog at the pet store, you only support all the horrible puppy mills", so I looked for a professional breeder. I was also dead set on finding a red min pin, rather than settle for the more common black and tan... I finally saw an ad in the paper and went all the way to north Florida to pick up Bob! (That is 9 hours back and forth!) He was registered with the AKC, and his parents were on the premises, his father was a handsome champion, very strong and sturdy looking.

I noticed right away he seemed to be a little sick, so the next day I took this little tiny puppy to the vet. So much for a pro breeder... the little guy had kennel cough, a very dreaded decease! He had also recently had a worm infestation that still had him a little anemic. He ended up having seizures that scared the heck out of us! Apparently he didn't have enough red blood cells to carry needed oxygen to his brain, hence the seizures... He also came down with a bad case of pneumonia, and his lungs are to this day scarred from that, he sounds like he has asthma, the vet calls it "chronic bronchitis". The breeder's response to all this? "He must have gotten sick on the way home to your place". She dis end up paying for the antibiotics for the kennel cough, but that was a drop in the bucket with all the other vet costs. She then offered to take him back and give us a refund. What? He was our baby now! No way! I happen to believe that if you get a pet, you are that pet's caregiver until death do your part. It is a family member! Plus all the emotion and love we had invested in little Bob, no way!

Bob in trimmer days...
Bob went on to be a pretty sickly dog (we are kindred spirits, he and I!). He should have been dead, really, but he is doing remarkable great!

A year later I decided to add another min pin to the family, but this time I was happy to have learned about the Miniature Pinscher Internet Rescue Organization. If you ever are looking to get a dog of a specific breed and don't want to go trough the regular pound or humane society, please, please look up that breeds rescue organization! There usually is one for any breed, sometimes several in one state. These organizations have dedicated foster care parents that put a lot into rescuing these animals. You usually have to go through an adoption application to ensure you are a good candidate (we even had our home checked!), but their fees are usually very reasonable and most likely will include neutering/spaying, vaccinations and micro chipping. Through them I was able to adopt Stan, who was at the time 18 month sold, just a few months older than Bob. (By the way, the husband named both dogs, I got veto right on any name for our first born). 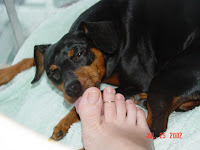 Stan will try to groom you any chance he gets, he will even clean your feet and ears!

Unlike Bob, Stan was healthy as can be, and very athletic! He had never received any vaccinations, and he was freshly neutered when we got him. He had also a small skin problem on his ear that they had cleared up before we got him. At first Stan was very scared of everything, after all, he had been in 7 homes before we got him! The previous homes had all said he was too high strung and active. Well, that might have something to do with the fact they locked him in a small caged for most of the day while they were at work. I take my dogs for several walks during the day, and he is as mellow as can be... unless another dog walks by outside, then he wakes up with a start (he can hear the tiniest little plinking sound from a dog's collar when they go by, amazing!) 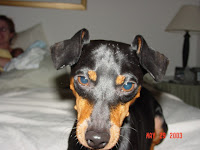 You gotta love that face!
These guys are a horrible nuisance ;-)! Stan can jump 5 feet straight up in the air, getting things off of the kitchen counter is a snap. They are like mischievous little kids. I love them! 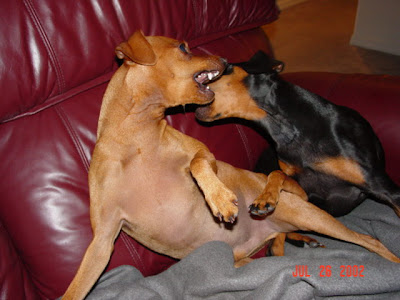 What is so special is how different their personalities are. Stan lives for love. He has a psychological disorder. If you don't pet him he will force you. He can be a pain in the but. But it is a nice disorder to have! He always comes if you call him, hoping you will touch him somewhere... Bob might come. If you have food. He is not the snuggle type. Stan sleeps between the husband's legs at night, Bob sleeps on a pillow on a chair in the living room. He can't stand when it is too hot! (Plus he snores like an old man, so he is kind of banished from the bedroom...)

Stan is slim and in great shape. Bob has two distinct fat rolls on his neck and butt. And stretch marks on his belly. And a slight resemblance to a pot bellied pig. Stan can tolerate any torture from the daughter, he will pretend to get mad and dole out a wet bite, no teeth. Bob hates being messed with, and he bites as if his life depended on it! Stan loves new people and will sit on anyone's lap. Bob will not stop barking as soon as any visiting male opens his mouth... They both have a special spot in my heart, they truly are family!
Posted by SweFloKeto at 1:03 PM