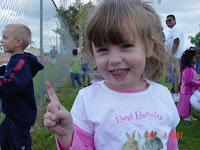 S getting ready for her turn on the field

We had a very fun egg hunt this morning! It was a bit chilly, but nothing at all what they had promised. We went out for breakfast first, and we were ready at the park when Peter Cottontail, a.k.a. The Easter Bunny arrived with the conquistadors. As I mentioned before, the egg hunt is part of the Desoto Heritage festival. 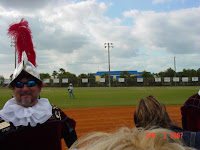 A conquistador with the field full of eggs in the background

In 1539, Hernando de Soto, the Spanish conquistador, landed at what is now Shaw's Point here in Bradenton Florida, and began his 4,000 mile search for El Dorado, the legendary lost city of gold. The De Soto National Memorial marks the site and each spring, a month-long gala celebration, The De Soto Heritage Festival, is held to commemorate De Soto's landing.

Everything culminates in a huge parade on April 28th, we attended for the first time last year and had a blast! We will go this year as well, and friends of us are having a private party in conjunction with the parade, so that should be fun.

When the Easter Bunny arrived the conquistadors were throwing beads from the ship, and all the kids went wild. S got a lot of them, and she also got a commemorative Desoto Coin from one of the conquistadors, which she was very proud of. 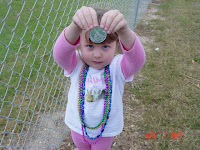 S hold up her commemorative coin

She even got to say hi to the Bunny himself! 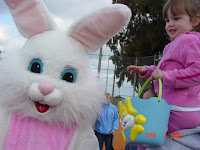 S and the Easter Bunny

After that it was time for the hunt. Everyone ran out on the field (they have separate hunts for different age groups). S immediately knew the drill and soon had a basket full. You had to open all the eggs before leaving since there were tickets for special prices in some. A lady from the local newspaper took our picture, so we will see tomorrow if we made it in print, I will post the picture if I see it! 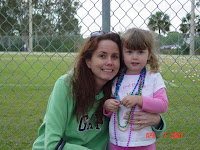 We left feeling we had a great time. It really was a great family fun time!
Posted by SweFloKeto at 5:42 PM